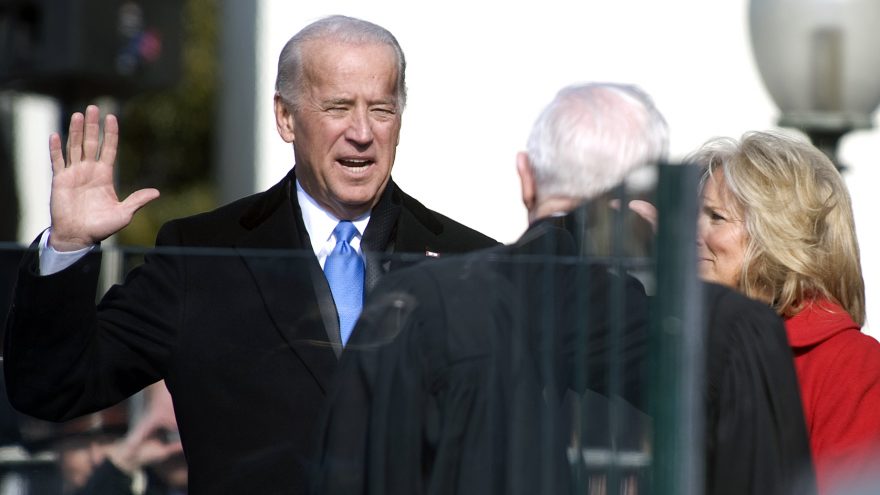 The Democrat-media complex has suddenly decided that Joe Biden has a creepiness problem. Why now? Why not when he was vice president for eight years? Does anyone remember the allegedly fierce White House press corps pelting the press secretary with questions, asking when then-President Obama would tell his understudy to stop putting his hands on women — and little girls — and putting his face uncomfortably close to theirs?

There have been scads of photos of Biden pawing women, putting his arms around girls, kissing their necks, etc. Conservatives have mocked them for a long time. But liberals always suggested it was just “Biden being Biden.”

Back in February 2015, the internet went viral with pictures and video footage of Biden at the swearing-in ceremony for Ash Carter as secretary of defense. He stood behind Carter's wife, Stephanie Carter, and placed his hands on her shoulders and his nose in her ear, whispering ... something. The optics were eerie, to say the least. But this was Uncle Joe, and it generated only a light gasp followed by giggles.

NBC noted that The Washington Post called him "the world's most powerful close talker." ABC actually quoted The Daily Caller for a giggle: The new secretary of defense "Can't Even Defend His Wife From Joe Biden," the Caller headlined. They were also jokey at CNN, as John King mused, "I guess it all depends on your generation and your view of Joe Biden. But at one point, if you watch her eyes, she looks like she wishes she could say, 'Scotty, beam me up.'"

This changed last Friday, when Lucy Flores, a 2014 Democratic candidate for lieutenant governor of Nevada, recounted a tale of then-Vice President Biden grabbing her by the shoulders, and leaning in to smell her hair and kiss her on the head. Flores is a backer of Sen. Bernie Sanders.

She testified: "I felt two hands on my shoulders. I froze. 'Why is the vice-president of the United States touching me? ... He leaned further in and inhaled my hair. I was mortified ... He proceeded to plant a big slow kiss on the back of my head. My brain couldn't process what was happening. I was embarrassed. I was shocked. I was confused."

Biden issued a statement in response: "I have offered countless handshakes, hugs, expressions of affection, support and comfort. And not once — never — did I believe I acted inappropriately."

So what happened to turn the tables on Uncle Joe, who's now five years older, and presumably less menacing? The big change in the interim is the #MeToo movement, of course, where excesses have ruined what would otherwise be a noble demand for a return to chivalry. Biden's behavior in no way compares to the rapacious assaults of a Harvey Weinstein. There's no evidence of sexual harassment. It doesn't matter. To the radicals, perception's enough to justify a lynching.

But it's not just the #MeToo overreach. Biden is leading in many polls, and that's a problem for the radicals who perceive that he's not leftist enough. He's not perceived to be as leftist as Sanders. He's not perceived to be as leftist as Rep. Alexandria Ocasio-Cortez. It doesn't matter that he favors abortion on demand, or that he declared in 2012 that transgender discrimination is "the civil rights issue of our time." It doesn't matter that he's taken a far-left position on just about everything. He may rate a 99 percent on the left, but it is looking for 103 percent.

The No. 1 "journalism" objective in 2020 is beating President Trump. They are clearly seeking to remove the biggest obstacle to an American socialist revolution. Democrats who don't march in lockstep may be yesterday's news.