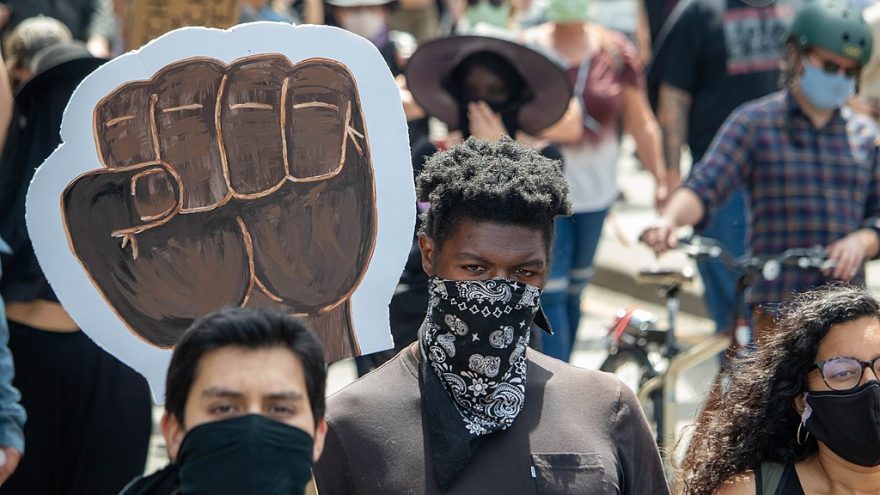 
The media has actively facilitated the destruction of race relations in the United States. You could look at the recent debate as an example when Chris Wallace asked President Trump to denounce White Supremacy as if he hadn’t already done it tens of times before prompted.

Yet, no pressure on Joe Biden to denounce Antifa or BLM, groups that are tied to recent and current violence across many Democrat run cities in the U.S.

You can look at the way the media runs articles titled things like “White cop shoots black man” and ignores race in other instances, or the way they cover Black Lives Matter protests that turn into riots as ‘peaceful protests’ while buildings are burning in the background.

And you can look at the lack of coverage of the NFAC (Not F#$%ing Around Crew)  armed marches in cities across the south while they chant things like “Black Power!” and “Black Nation!”.

The paramilitary group (NFAC) is said to be composed of former military snipers and soldiers.

The 'grandmaster' of NFAC said that they want the government to give them Texas, or in his words, they'll take Texas.

The mainstream media is largely, if not wholly, silent on this.

But what if the roles were reversed?

What if this was an armed conservative white group that claimed to be comprised of ex-military snipers and soldiers that was marching through streets chanting "White Power!" and "White Nation!"?

What if they did that at the same location as a voter registration effort was ensuing? The NFAC did, in Lafayette, Louisiana.

The media still talks about Charlottesville

Do you think for one second that a federal police force wouldn't raid that group in the middle of the night, at their homes, arresting and charging them as a hate group with hate crimes?

The leftist media has sold you the narrative that there is some massive racial injustice going on and that white people are evil and black people are victims.

Their evidence? Their own articles.

They create the narrative, then sell the narrative from their podiums, and then cite the evidence (coincidentally, their articles).

There is racism in the United States and there likely always will be, just like there will always be criminals and crime. However, if you look outside your door, things are not nearly as bad as they seem on TV (unless you live in downtown Portland or another overrun Democrat city).

Don't let the media sell you a false narrative that the U.S. is systemically racist.

Most people get along just fine, regardless of race. But, we do need to take violent and threatening extremist groups, on both sides and all races, seriously or things could easily get way out of hand. Yes, it could get more out of hand.

If you want to blame someone for racial division in our country you can blame the media. They've owned it, with pride.

19 thoughts on “What If The Roles Were Reversed?”