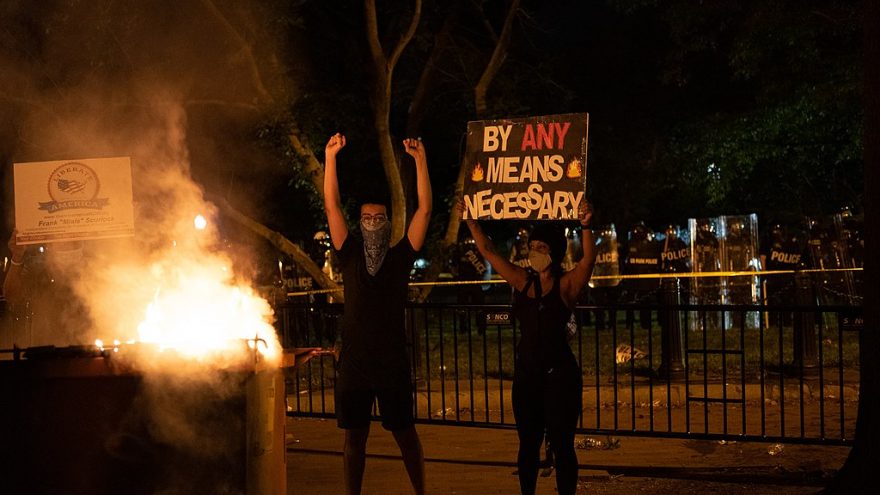 
In 2008, around the time of the Republican National Convention, a white 20-something male approached the Texas Governor’s Mansion and threw a Molotov cocktail at it. The mansion burned down. The case remains unsolved, though federal and state authorities have long presumed it was a left-leaning anarchist.

In fact, around the same time, left-wing anarchists were fighting police in the streets of St. Paul, Minnesota, during the GOP’s convention, and some plotted to go back to Texas to commit acts of violence.

In 2010, Andrew Joseph Stack crashed a plane into an IRS building in Austin, Texas. Members of the media immediately concluded he must have been a deranged tea party activist. In fact, Stack was both a nut and a Marxist whose suicide note attacked corporations and the Catholic Church.

Also in 2010, John Patrick Bedell opened fire at the Pentagon. Some in the media jumped to the conclusion the shooter was of the tea party. But the Christian Science Monitor noted Bedell was an “anti-Bush registered Democrat who believed 9/11 was planned and carried out by the US government.”

Also in 2010, James Jay Lee took hostages at the Discovery Channel, and members of the media again initially presumed it was a tea party activist doing it. But it turned out Lee was a leftist who was upset about global warming.

When Jared Loughner attempted to assassinate Rep. Gabby Giffords in 2011, the media rushed to tie it to both the tea party and Sarah Palin. More than once while I was on CNN, I had to defend "warlike rhetoric" from the right, with everyone pretending politics had never used war metaphors before then. It turns out Loughner was actually just mentally ill.

In 2012, during the Republican National Convention, left-wing protestors stockpiled 300 tiles, bricks, pipes and even riot gear to violently disrupt the RNC. Over and over, the media rushed to blame the tea party, and over and over, it turned out the violent extremists were on the left.

Even James Hodgkinson quickly disappeared from the headlines the moment it turned out he was a "Bernie bro" after his mass assassination attempt on Republican members of Congress. Today, the Democrats and their friends in the media claim political violence only began with the rise of President Donald Trump, but history shows otherwise.

On Aug. 15, 2012, inspired by the Southern Poverty Law Center's website, much like James Hodgkinson, Floyd Lee Corkins walked into the Christian conservative Family Research Council with a gun and a bag of 15 Chick-Fil-A sandwiches. He intended to murder the employees of the Family Research Council and smear their faces with the sandwiches. "They endorse Chick-fil-A and also Chick-fil-A came out against gay marriage, so I was going to use that as a statement," Corkins told investigators. Thankfully, Corkins never got past the guard.

Biden is a man who once told Black voters that Republicans would put them "back in chains." He worked for a man who told his supporters to take guns to knife fights, told Hispanic voters to punish their enemies, who he identified as Republicans, and encouraged his voters to get in their neighbors' faces. Barack Obama's campaign also pioneered sending postcards to voters and setting up websites where they could see if their neighbors were Republicans or if they had voted.

Again, the media revisionists ignore all of this to claim Trump is uniquely bad. The political rhetoric and political violence in this country are absolutely heating up. We are in dangerous times as a republic that depends on the consent of the governed. But the times we live in have built off prior times and even some more desperate times. Donald Trump is a unique political force. We should not, however, presume that what we are seeing today is unique to now or to Trump.

3 thoughts on “The Violence Is Not New”