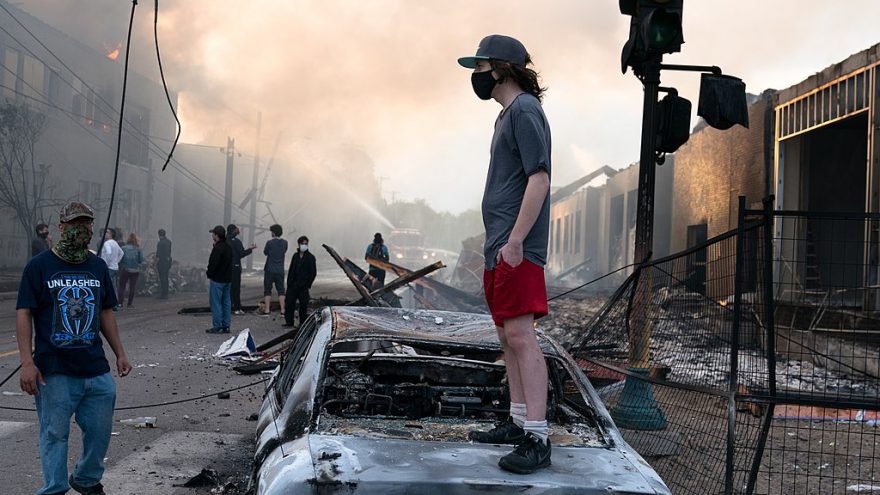 
As the city is being looted, destroyed, and burnt to the ground, Minneapolis Mayor Jacob Frey asked the rioters to wear masks and practice social distancing.

“The City encourages everyone to exercise caution to stay safe while participating in demonstrations, including wearing masks and physical distancing as much as possible to prevent the spread of COVID-19. The City has made hundreds of masks available to protesters this week,”

Well that’s awfully nice of them.

What we have seen out of Minnesota is an absolute failure of leadership.

While they police were being urged to arrest anyone who was not practicing social distancing or was attending church services, rioters were burning Minneapolis buildings to the ground and assaulting innocent business owners.

But apparently what was more concerning was the practicing of social distancing.

“As we stand here grieving, yet another loss of black life, I am asking my colleagues, the mayor, and anyone else who is concerned about the state of affairs in our community, to declare a state of emergency declaring racism as a public health issue,” Jenkins said.

Mayor Jacob Frey went on to justify the actions of the mob.

“What we’ve seen over the last two days, and the emotion-ridden conflict over last night, is the result of so much built-up anger and sadness, anger and sadness that has been ingrained in our black community not just because of five minutes of horror but 400 years,” Frey said, according to The Washington Examiner (my former employer). “If you’re feeling that sadness and that anger, it’s not only understandable. It’s right.”

Notice what's missing from these statements?

Accountability. Acknowledgement of a terrorist organization trashing the people and city of Minneapolis.

Read more at The Daily Wire.