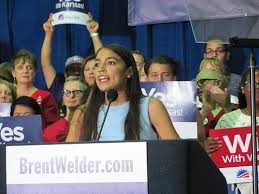 
Freshman Congresswoman, Rep. Alexandria Ocasio-Cortez (D-NY) got caught lying  again, this time about remarks she made in July, to PBS.  To make matters worse, she was caught lying about something she was untruthful about before. Below is an excerpt from the Daily Wire.

In an interview this week, socialist Rep. Alexandria Ocasio-Cortez (D-NY) lied about remarks she made in July 2018 during an interview on PBS’s “Firing Line With Margaret Hoover,” falsely claiming that the video clip of her saying that Israel was occupying Palestine was “doctored.”

Just to be clear, she is saying that something she said before, which was caught on video, was doctored.  It definitely was not doctored, as it’s on video, and if it was doctored, somehow, Cortez would be suing folks, rather than making these claims.  Long story short, Cortez, against her Press Secretary’s wishes, we assume, is lying about a lie she made before, that was documented on video.

What Cortez unwittingly brought upon herself, is attention to a lie she made in the past, that most were unaware of until she made it an issue. Sigh!

One of the hard things, for well meaning folks on the right,  about the Freshman Congresswoman from New York, is that she is a young person, who, despite her political leanings, is likely very bright, and is a person you hope can help make our country a better place to live in.  She is still capable of that, however, thus far she has proven to be more of a treasure trove of embarrassments,  than she has as an upstart talent for the Democrats. Time will tell.