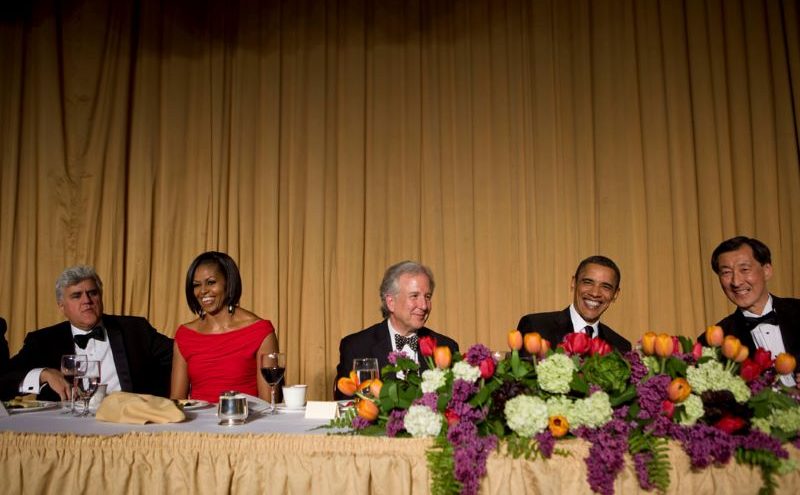 
Washington journalists are rejoicing that celebrity glitz and glamour are returning with their self-celebrating soiree, the White House correspondents’ dinner. They announced that longtime “Saturday Night Live” player Kenan Thompson will host the April event, and Muslim comedian Hasan Minhaj will perform the Republican-bashing “comedy” routine.

“The dinner has a serious message, but we also believe it is as important as ever to be able to laugh — at ourselves, as well as at the people we cover,” said White House Correspondents’ Association President Jonathan Karl. “I’d argue that humor is more important now than ever.”

Liberals cling desperately to humor, “now more than ever,” just as The New York Times advertises by saying, “The truth is more important now than ever.”

The biggest joke of this dinner is Karl’s claim that it is “a nonpartisan event.” Just look at the last three presidents. Leftists like Stephen Colbert famously roasted President George W. Bush. But when Barack Obama became president, a series of comedians oozed their appreciation of the Almighty Barack, spelunking to the all-time low of Larry Wilmore, who proclaimed in 2016: “Yo, Barry. You did it, my n—-!”

The "nonpartisan" newscasts on ABC, CBS and NBC covered that event with 35 sound bites that celebrated Obama's comedy routine and touted him as "the funniest president of all time," compared with only two sound bites from Wilmore. One clip was a supine tribute to Obama, not even a joke.

Minhaj was hired for this gig in 2017, so we know Karl must be joking that this man is going to attempt to be nonpartisan. Back then, the association's president, Jeff Mason of Reuters, claimed it would be unfair "to roast President Trump in absentia." But it was inevitable.

Minhaj dribbled out lame jokes about President Donald Trump's aides who were not in attendance including "Nazi Steve Bannon" and Education Secretary Betsy DeVos, who was "busy curating her collection of children's tears." Then-Attorney General Jeff Sessions was busy with a "pre-Civil-War reenactment." Minhaj joked that Sessions said no to attending, and that "no" is "his second favorite N-word."

Minhaj compared Trump to amoral, sadistic, inbred King Joffrey of "Game of Thrones" and joked: "The leader of our country is not here, and that's because he lives in Moscow. ... As for the other guy, I think he's in Pennsylvania because he can't take a joke."

Then Minhaj mocked the media for criticizing Trump's golfing habits, since any distraction prevents war with North Korea. He suggested that the headline should read, "Trump Golfing. Apocalypse Delayed. Take the W."

Minhaj goaded the press to stay tough: "We are living in the golden age of lying ... and Donald Trump is liar in chief! And remember you guys are public enemy No. 1. You are his biggest enemy. Journalists, ISIS, normal-length ties. And somehow, you're the bad guys. That's why you have to keep your foot on the gas."

Jon Karl heard it all and clearly wants another heaping helping of this kind of "comedy."

Last time around, Minhaj worried out loud saying that in the Trump era, "trust is more important than truth." And many people don't trust the press, which he equates with truth, just like The New York Times does.

These highly educated, well-read policy nerds somehow can't imagine that a comedy routine like this mixed in with candid shots of Wolf Blitzer or Brian Stelter guffawing along isn't helping the idea that the press is nonpartisan, that it doesn't see itself as valiantly taking a side. They're urged to keep their "foot on the gas" and excuse most of us for not daring to hitchhike.

Tim Graham is director of media analysis at the Media Research Center and executive editor of the blog NewsBusters.org. To find out more about Tim Graham, and read features by other Creators Syndicate writers and cartoonists, visit the Creators Syndicate website at www.creators.com.
COPYRIGHT 2020 CREATORS.COM

4 thoughts on “Another Corrosive Correspondents’ Dinner”