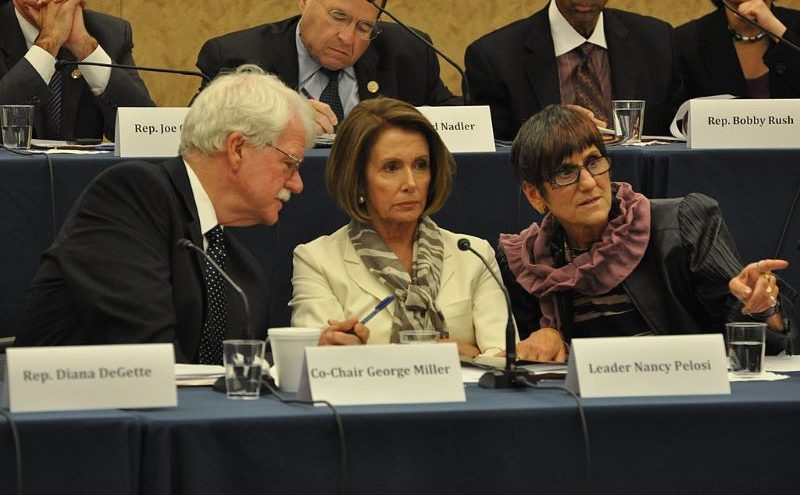 
It would have been hard to orchestrate a worse week for Democrats. From Iowa to impeachment, the political winds shifted against them.

Speaker Nancy Pelosi, only a few months ago, had been praised by the American political press as a strategic genius. Her role in orchestrating the impeachment of President Donald Trump had her declared a political winner by a host of news network reporters, not just pundits. The Democrats started by coordinating with a whistleblower whose name everyone in Washington seems to know but only Sen. Rand Paul will dare utter.

After that coordination, Democrats opened an investigation the media found absolutely devastating. The number of reporters who declared everything terrible for the President increased. But the number of Americans who wanted the President tossed from office barely budged from around 47%, tied with those who wanted him to remain.

Then, having helped orchestrate the impeachment, Pelosi held on to the articles of impeachment. The media proclaimed it to be another strategic victory designed to build pressure on the Senate for fair rules. Ultimately, Pelosi sent the articles, and the Senate created rules that had no relation to the delay. Pelosi and the Democrats then demanded witnesses they had never called in the House.

Media allies proclaimed the Senate had heard from no witnesses, despite having 17 witnesses entered into the record. As an aside, it is amazing how much the mainstream American press, from news networks to newspapers, was willing to parrot the Democrats' talking point on witnesses.

The Republican objection had always been that the Senate should hear from no witnesses the House had not first heard from. It was a fair point. Since the first impeachment in the late 1800s, the Senate has rarely heard from witnesses who have not first testified before the House. It has happened only a handful of times, in the trials of Walter Nixon, Bill Clinton and Thomas Porteous. In the President's case, the House failed to get the White House chief of staff or former national security advisor to testify. They blamed the court system but failed to push for an expedited court review. They just passed their job to the Senate.

The Senate rejected calling witnesses. Then, despite media hysteria, they acquitted Trump. It remains underappreciated that the House Democrats got only one Republican, Sen. Mitt Romney, to vote for impeachment, given how many House Republicans privately loathe the President. And one House Democrat actually became a Republican over impeachment.

On the week the Senate acquitted the President, Democrats had an embarrassing spectacle in Iowa. The former vice president of the United States, who served for two terms under Barack Obama, utterly failed to gain traction. The technology-focused Democrats, who spent four years lecturing Americans about voter security, managed to roll out an app to count the vote in Iowa, and it crashed. We now know the Department of Homeland Security offered to help vet the app's security, and the Democrats refused. The spectacle of the Democrats' failure helped to overshadow both Joe Biden's collapse and Bernie Sanders' momentum.

The next day, Trump delivered a remarkable State of the Union address tailor-made for a nation that no longer remembers lines of speeches but will remember Instagramable moments. One of those moments was honoring the last surviving Tuskegee Airman, and another honored an African American mother whose daughter is about to get a great education. For both, the Democrats sat. The end of the speech saw Pelosi rip up the printed copy of the President's speech. Even a lot of Democrats were appalled.

For months, Democrats and the press have been in a feedback loop of self-congratulatory back-patting. Guided by elite opinion on social media, Democrats marched themselves off a cliff to applause from the left. They now face a President with higher approval ratings than Obama had when he began his campaign for a second term.