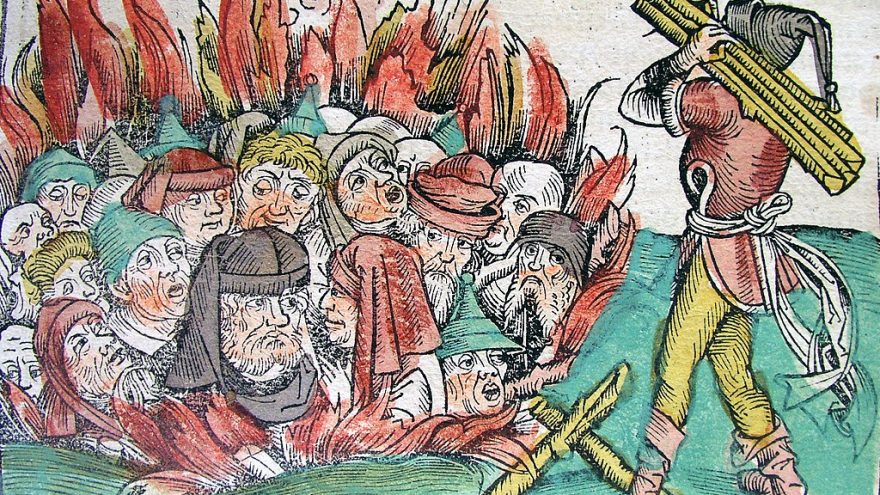 Four people were murdered at a kosher supermarket in Jersey City by self-described Black Hebrew Israelites just weeks ago; five people were stabbed at a Hanukkah celebration in Monsey, New York; this week alone, New York police are investigating at least nine anti-Semitic attacks. The upsurge of violence against Jews in New York in particular has finally prompted commentary from Democratic politicians ranging from New York Mayor Bill De Blasio, who just weeks ago expressed shock at anti-Semitism reaching “the doorstep of New York City”; to New York Gov. Andrew Cuomo, who expressed puzzlement at the attacks, noting broadly: “This is an intolerant time in our country. We see anger; we see hatred exploding.”

This isn’t new. Back in 2018, The New York Times admitted there was a massive spike in anti-Semitic attacks in the city — and even acknowledged that the newspaper of record had failed to cover that surging anti-Semitism because “it refuses to conform to an easy narrative with a single ideological enemy.” But that has always been true of anti-Semitism. It’s possible, as The Times should recognize, to walk and chew gum at the same time in covering anti-Semitism.

But it’s not mere lack of focus and time preventing the media from taking anti-Semitism in New York seriously. It’s the identity of the attackers. Armin Rosen wrote for Tablet Magazine back in July 2019 about the Jew hatred in New York and correctly noted “that the victims are most often outwardly identifiable, i.e., religious rather than secularized Jews, and the perpetrators who have been recorded on CCTV cameras are overwhelmingly black and Hispanic.”

This throws the media -- and many left-leaning Jewish organizations -- into spasms of confusion, since it cuts directly against the supposed alliance of intersectionality so beloved by the political left. White supremacists attacking left-leaning Jews fits a desired narrative. Black teenagers beating up Hasidic Jews in Williamsburg doesn't.

And so the left ignores the wrong type of anti-Semitism.

The same media that will ask whether President Donald Trump's executive orders designed to protect Jews on campus are  actually anti-Semitic will ignore the fact that former President Barack Obama sat in Jeremiah Wright's church for 20 years -- the same Jeremiah Wright who railed against Jews and Israel routinely during those years; who said Jews kept Obama from talking with him after the election; and who avers that "Jesus was a Palestinian."

Democratic candidates who suggest that Trump has emboldened anti-Semites will make pilgrimage to Rev. Al Sharpton, who was instrumental in not one but  two anti-Semitic riots. The same commentators who will police Republican references to George Soros for hints of anti-Semitism completely excuse open anti-Semitism when it comes from Reps. Rashida Tlaib and Ilhan Omar. It's deemed completely vital by our intelligentsia to survey white Americans for signs of white supremacy and, by extension, signs of anti-Semitism. Those same intelligentsia will patently ignore the fact that anti-Semitic attitudes among black Americans  far  outweigh similar attitudes among other racial groups, according to repeated polling by the Anti-Defamation League.

Anti-Semitism grows when the victims become secondary and the perpetrators become primary. If you're only concerned about anti-Semitism from white supremacists but utterly blithe about Jews being beaten in the streets of one of the nation's largest cities by suspects who clearly are not white supremacists, you're part of the problem. And that goes for those who govern New York, from De Blasio to Cuomo.

Ben Shapiro, 35, is a graduate of UCLA and Harvard Law School, host of "The Ben Shapiro Show" and editor-in-chief of DailyWire.com. He is the author of the No. 1 New York Times bestseller "The Right Side of History." He lives with his wife and two children in Los Angeles. To find out more about Ben Shapiro and read features by other Creators Syndicate writers and cartoonists, visit the Creators Syndicate website at www.creators.com.

4 thoughts on “When Anti-Semitism Doesn’t Matter”