Since the initial reporting surrounding the Sen. (R)-FL. Marco Rubio volunteer who was attacked while canvassing for Rubio’s campaign in Hialeah, Florida, Fox News has since reported that the police have made one arrest so far. One suspect in the attack, according to the police report published by Florida’s Local 10 News, identified Javier Lopez as a suspect. While the canvasser was walking in the neighborhood, Lopez is alleged to have said “You can’t pass by here, this is my neighborhood.” Following the interaction, Lopez is alleged to have rushed at the canvasser, then continued to punch, kick, and slam him into the ground. The canvasser sustained multiple injuries, and according to Sen. Rubio via Twitter “He suffered internal bleeding, a broken jaw & will need facial reconstructive surgery.”

Mayor Esteban Bovo has also made a point to say police are “looking at others that may have participated.” During the attack, the volunteer canvasser was wearing a Ron DeSantis hat, along with a Rubio campaign shirt.

Monday, Florida Republican Senator Marco Rubio announced on Twitter that one of his campaign canvassers was seriously injured while knocking on doors as part of his campaign. In his tweet, he mentioned that the volunteer suffered from internal bleeding and a broken jaw. According to the tweet, the volunteer was attacked by four “animals” and told Republicans weren’t allowed in the neighborhood. 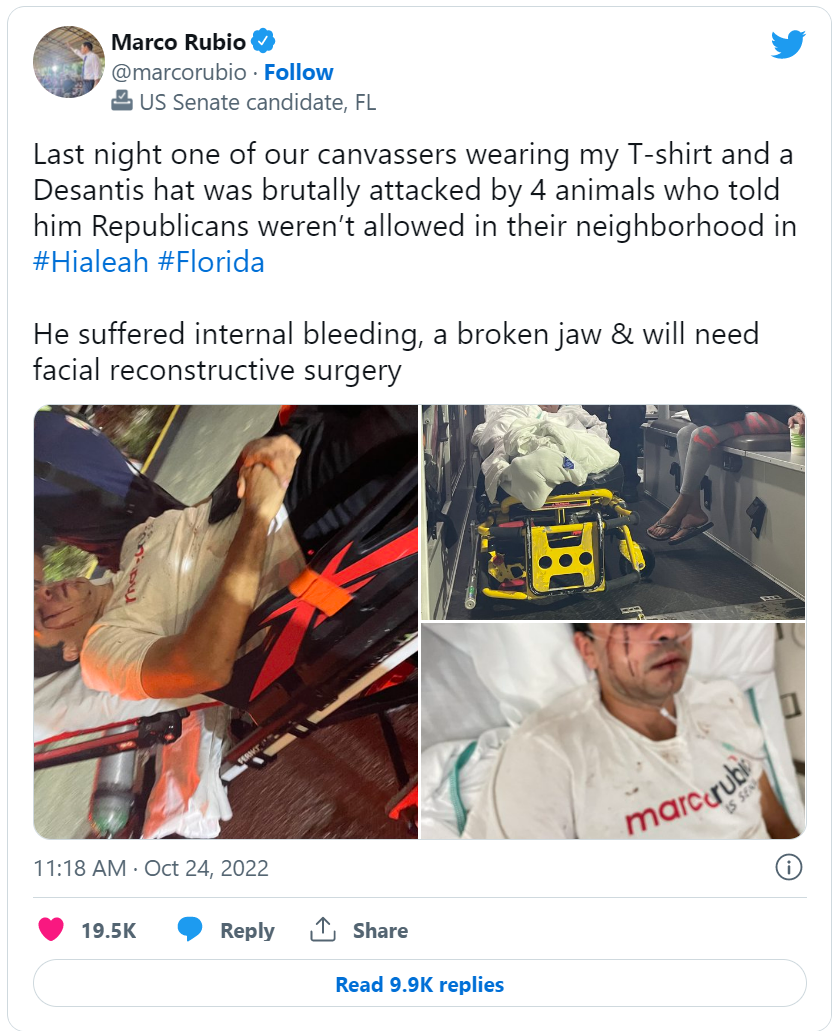 Senator Rubio is currently up for reelection in the November 8th elections and is running against Congresswoman Val Demings. As of today, according to FiveThirtyEight, Rubio is ahead in the polls with a 4.8% lead.

A few Democrats have come forward in response to the tweet sending condolences and mentioning they are “not the party of violence.” Though clearly in this case there was definitely some violence since the volunteer will need facial reconstructive surgery.