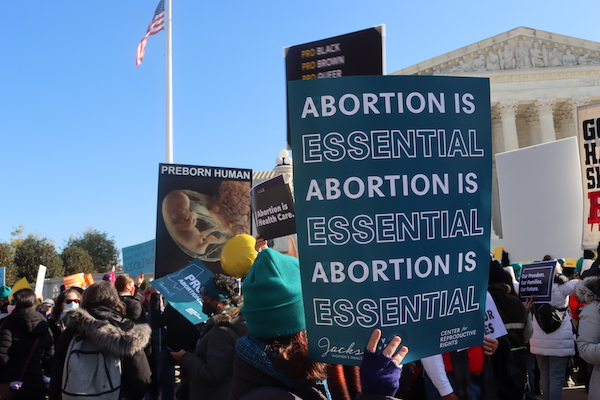 
In the United Kingdom, the state might soon imprison citizens for 2 years just for speaking out against abortion. A potential new amendment states that if someone only interferes with someone’s decision to have an abortion, they may be subject to 2 years imprisonment.

“A person who is within a buffer zone and who interferes with any person’s decision to access, provide, or facilitate the provision of abortion services in that buffer zone is guilty of an offense”.

The woman leading the charge is Rupa Huq. She is an MP for Ealing Central Action and argues that it should be illegal to offer support for women considering abortion within 150m of any facility that provides abortions. Among the blanket of “interference” is offering help and support. Anyone who tries to encourage women against the decision would be in violation. In the amendment itself, anyone who “informs or attempts to inform about abortion services by any means,” is in violation.

Make Them Think There’s No Way Out

Huq wants women to think abortion is their only option once they near a clinic. No one can offer these women help or give them information about alternatives if this were to pass. These zones censor communication and only allow individuals to approve of abortion. As Live Action states, “it would make it illegal to be publicly pro-life outside an abortion clinic.”

One of the biggest problems with this legislation is that it bars women from seeking help. Some 44% of women report regretting their abortion. Most of these women report depression, feelings of loss, and a general discomfort around children. Even a study from the National Institute of Health found that women often feel grief, shame, and even fantasize about actually having the child they killed. Many of these women need help. A law like the one Huq proposes would make it illegal for any kind and caring citizen to offer that help.

One example is Alina Delgheriu, who desperately needed help. She spoke to caring and compassionate advocates outside a London abortion clinic. It changed her life forever and saved the life of her child.

“The day that I turned up to my abortion appointment, a volunteer outside the clinic gave me a leaflet. It offered the help that I had been searching for. I weighed up the two options I had before me, and I chose motherhood. I chose to accept help to get housing, help to find a job and help to obtain a pram, a cot and nappies. It wasn’t easy. But with the support of the group who had given me that leaflet, I couldn’t be prouder of the life my daughter and I have charted out together”.

Without the care and compassion of pro-life advocates, she would have believed the lie that she was alone. Many women believe that if they have a child, pro-life groups would do nothing to help them raise their son or daughter. That couldn’t be further from the truth.

Luckily, only 21% of the UK supports these censorship zones. Huq also failed to pass this amendment several times in the past. The fact that even 21% support this though is a frightening reality to face. By those numbers, in a room of 5 people, one of them thinks that women should not know that there is any other option besides abortion.

Most pro-abortion advocates know that it’s wrong but only have concern for themselves. So many women need help but don’t know where to find it. At the end of the day, the greatest victim is the child who never has the chance to take their first breath of life.