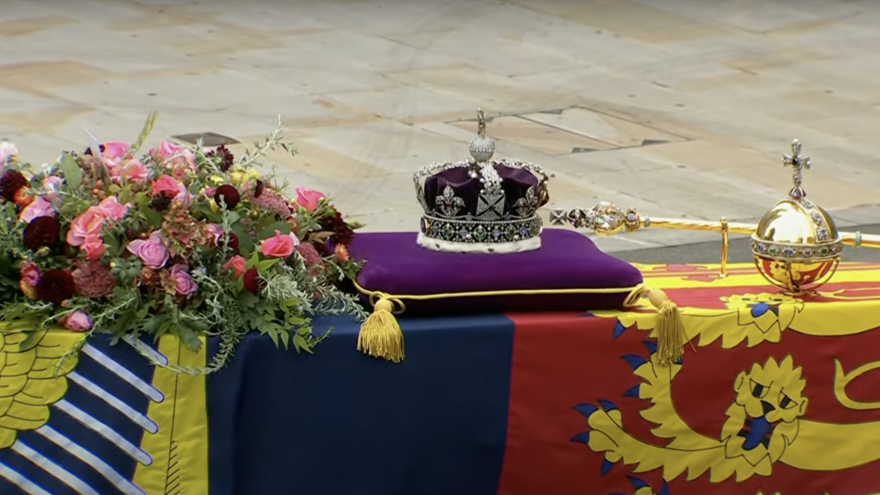 
The que for mourners to pay respects to Queen Elizabeth II as she lies in state is hours long. Prince William and Prince Harry are holding a vigil. During preparations for the vigil, King Charles III and Prince William could be seen chatting with children and other mourners who were waiting in the long que – which was nearly 16 hours long. Meanwhile, President Joe Biden and the First Lady made their way to London to pay their respects. There are rumors that they will upstate the Queen’s funeral with their entourage of over 40 people on their security detail.

The Queen’s funeral will take place on Monday, September 19 at 11am London time at Westminster Abbey.

According to CBS News, funeral arrangements for Queen Elizabeth have been unveiled.

Plans for the funeral, which the queen herself consulted on, have been in place for years.

At the conclusion of the service, two minutes of silence will be held across the U.K.

Following the service, at around 12 p.m. local (7 a.m. Eastern) the queen’s coffin will be taken in a walking procession to Hyde Park, and then by hearse to St. George’s Chapel at Windsor Castle, the sprawling estate west of London where the late monarch spent a lot of her life, and much of her last few years isolating amid the coronavirus pandemic.

St. George’s Chapel is the final resting place of the queen’s sister, Princess Margaret, and her late husband, Prince Philip. It is the chapel often chosen by the royal family for events like weddings and funerals. It is where the Duke and Duchess of Sussex, Harry and Meghan, got married, and where Philip’s funeral was held.

Once her coffin arrives, at approximately 4 p.m. local (11 a.m. Eastern) a televised committal service will take place. The cameras will then be switched off for a private service to be held later in the evening for members of the royal family, at around 7:30 p.m. local (2:30 p.m. Eastern).

President Biden and first lady Jill Biden have confirmed they will attend the queen’s funeral, along with leaders from across the British commonwealth, including the prime ministers of Australia, New Zealand, Canada and Bangladesh, and the presidents of India and Sri Lanka. French President Emmanuel Macron and Turkish President Recep Tayyip Erdoğan are among the other political leaders expected to attend.

2 thoughts on “The Funeral for The Queen”