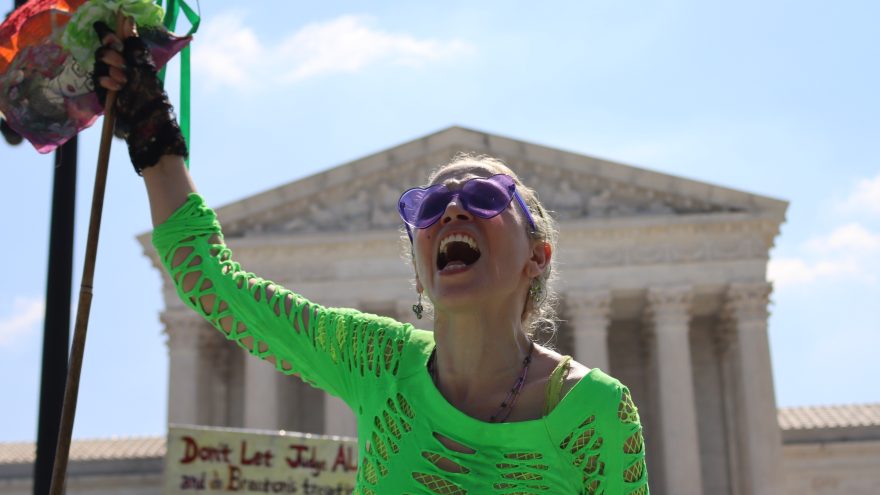 
The pro-life argument is quite simple: abortion is murder. No justification can allow someone to kill a child. Even though most abortionists support gun control, they can’t seem to stop themselves from using one of the best arguments against it.

The argument in question is also a simple one: “no law will stop abortions from happening.” Which, in the most extreme sense, is true. Just because it’s illegal doesn’t mean it won’t happen. Here’s an example from Democrat Representative Suzanne Bonamici of Oregon.

When abortion is made illegal, it does not go away. it becomes unsafe."

This serves as a powerful argument for the left because it not only attempts to justify murdering children, but it allows them to frame pro-abortion legislation as a “compassionate” and “thoughful” act protecting innocent victims of consensual sex. (Yes, consensual sex. They no longer use the word “rare” and rape only accounts for less than 1% of abortions. That’s according to the Guttmacher Institute, the research arm of Planned Parenthood.) Here is Gretchen Whitmer framing her own ghoulish policies in exactly that light.

No matter what happens to Roe v. Wade, I promise to keep fighting like hell for every Michigander’s right to safe, legal abortion.

The truth is, there are no safe abortions. Despite what Harvard, the Psychiatric Times, and Planned Parenthood would have you believe, women often report trama post-abortion. Even Planned Parenthood’s Guttmacher Institute admits that women nearly always have conflicting emotions after killing their baby. Mothers often report grief, pain, anger, loss, and even trauma responses after killing their unborn child. In many cases they also report feeling a need to connect with a child on the date their child would have been born. Even women’s bodies tell them that the so called “clump of cells” was a human being before bringing his/her life to a swift end.

So why do so many studies indicate that abortion does not cause trauma? Let’s take a look at one of the most rigorous. This Harvard study shows that only 2% of women who kill their children experience “complications.” That’s a low number which must mean that abortion is safe, right? Well, what they rule out is quite telling. They didn’t include exacerbated but pre-existing mental illnesses or anxieties as results of abortion. In reality, existing mental struggles become much worse after abortion. A Sage Journals peer-reviewed study corroborated this finding. In one study, 75% of participants experienced denial and 50% suffered long-term psychological distress. Moreover, if you continue to read the findings of that Harvard study, that 2% only includes complications from the day of the procedure. The same study shows that 40% of patients come back for emergency treatment within 6 weeks.

Another issue pro-abortion studies conveniently forget is how women often develop a connection to the child despite their problematic circumstances. Despite abortion killing their child, the brain still undergoes significant changes to the systems associated with maternal attachment.

Whether it’s physically or psychologically, abortion is never safe.

So What About Guns?

Well, is there ever a “safe” self-defense use of a gun? Debatable. What isn’t, is that most guns are designed to kill animals and people. That much is true. But much like a fire extinguisher doesn’t put out fires, a gun does nothing without a user. At the end of the day it’s only a tool.

Yesterday, I was at the Supreme Court and asked a pro-abortion protestor for comment. She said that making abortion illegal will only push it underground but it wouldn’t stop abortions from happening. When I asked her if that argument also applied to guns, she didn’t have an answer. She only said that the world would be safer without them. Maybe she’s right, maybe if we get rid of all guns, fewer people will die. So, what would it take to make that a reality?

There are approximately 400 million known guns in the United States of America. According to World Population Review, that’s the highest on the planet by a landslide. India comes in second with only 71.1 million compared to our 393.3 million and we have less than a fifth of their population.

According to AmmoLand, the vast majority of those firearms are not connected to any registry whatsoever. This is thanks to legislation that requires stores to delete records of background checks and gun sales. And there are likely even more due to illegal trafficking, DYI projects, and 3D printing.

So, to get rid of all the guns, we have to crack down on 400 million undocumented pieces of US private property. Then, we have to find and disband the manufacturers both above and under the table. Finally, we have to track down every 3D printer plan, delete it, and somehow shut down every at home firearm project. Sounds easy enough, right?

Not a chance in hell.

Illegalizing guns only keeps them out of the hands of the innocent. It makes the streets less safe by only disarming victims. We’ve seen this play out over and over again. After all, the vast majority of mass shootings happen in gun-free zones.

At the end of the day, guns prevent young women from becoming victims of domestic violence. Guns protect happy homes with children sleeping cozily in their warm beds. Gun laws will only disarm people like these. With 400+ million guns in this country, criminals, just like abortionists, will find a way.

There is of course, one key difference. A gun can be used to prevent a murder; the second a killer sees you’re armed, they’ll think twice. Abortion on the other hand, is always murder. When 96% of biologists agree the life begins at conception, abortion always has a victim; 100% of the time. A gun, like a fire extinguisher, is a tool that can and should sit on your shelf and collect dust. If you enforce laws against them, you will only disarm the peaceful citizens with respect for laws designed only to keep them safe.

So which America do you want to live in? One where students are helpless against an armed psychopath in a gun free zone? Or a nation where armed citizens carry themselves with dignity and respect; knowing that anyone they pass may be ready willing and able to stand tall and protect the innocent.