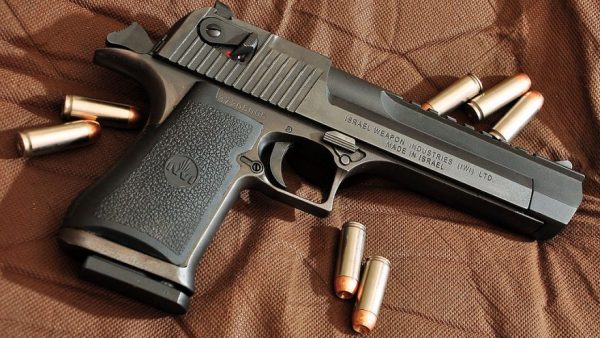 
Yesterday, the Atlantic framed the left’s primary constitutional argument against your right to bear arms. The argument is persuasive only if the reader isn’t familiar with the views of our founding fathers. With them in focus, it’s fallacious and weak. Every American should prepare themselves to respond with clarity so let’s break it down.

You may have heard the argument: “don’t forget the first half of the Second Amendment.” This, the title of the Atlantic’s piece, sums up their grand misunderstanding of the founders’ intent. They would argue that “the amendment doesn’t prohibit gun regulations; it demands them,” as Thomas P. Crocker argues.

Crocker makes three main points: collective gun ownership, security of a free state requires gun control, and FDR’s “freedom from fear.” If you meet a relatively well-read democrat, they will likely argue that these points prove that the Constitution demands gun control. In reality, it does just the opposite.

The first argument is the most common and concise. The Second Amendment only exists for a well-regulated military. This means that the government would control access and use of any and all firearms. But if this were true, why would the following clause say “the right of the people to keep and bear arms shall not be infringed?” Beyond that, we don’t have to speculate about our founders’ intent with the Amendment because they tell us in their own words.

Here is a quotation from Federalist #46 by Alexander Hamilton:

Besides the advantage of being armed, which the Americans possess over the people of almost every other nation, the existence of subordinate governments, to which the people are attached and by which the militia officers are appointed, forms a barrier against the enterprises of ambition, more insurmountable than any which a simple government of any form can admit of. Notwithstanding the military establishments in the several kingdoms of Europe, which are carried as far as the public resources will bear, the governments are afraid to trust the people with arms. And it is not certain that with this aid alone they would not be able to shake off their yokes.

A well-regulated militia meant private citizens coming together with their own private equipment. Our founders were wary of the idea of a standing army. They worried it would too easily become a vehicle for tyranny.

There is plenty of room to debate whether or not the founding fathers were right in their judgement. There is plenty of room to debate which schools of thought among the founders should have prevailed. There is however, no basis for the claim that they didn’t believe citizens should be heavily armed. Many democrats also argue that three key Supreme Court cases have overruled the Second Amendment permanently. We tackle those arguments here.

The Security of a Free State

Another common argument, and one from this article, is that the security of a free state requires gun control.

They would have you believe that citizens in this country are only safe if everyone is unarmed. Quite the contrary.

Peyton Gendron murdered 10 innocent children in Buffalo, New York on May 14th, 2022. New York has very strict gun laws and Gendron chose New York, not despite them, but because of them. He knew full well that gun control laws would make his victims softer targets.

Ultimately, Americans are safer the more that law-abiding citizens are armed.

There are approximately 400 million known guns in the United States of America. According to World Population Review, that puts us as number one worldwide by an almost unfathomable margin. The nation that has the second most civilian guns is India with only 71.1 million compared to our 393.3 million and we have less than a fifth of their population.

According to AmmoLand, the vast majority of those firearms are not connected to any registry whatsoever. And there are likely even more than these estimates due to illegal trafficking, DYI projects, and 3D printing.

Our well-meaning Democrat friends seem to think we can disarm the entire population.

According to the gun lobby, individuals engaged in their own fantasy of the heroic citizen equipped to do battle against tyrannical government agents would suffer incalculable collective costs were Americans to restrict their access to weapons. If the choice were the lives of children or the political imagination of a vocal group of armament activists, whose costs should matter more? The inconvenience of some or the lives of others?

History is full of stories of tyranny. It’s the norm rather than the exception. One of the main reasons America is so different is that our government was ever at the mercy of its citizens. And liberals wonder why prosperity and freedom are waning…

A “Freedom From Fear”

It would be easy to wax philosophical on this one but tackling this argument is much simpler than that. The Atlantic argues from a Franklin Delano Roosevelt speech that Americans are guaranteed a freedom from fear. There are several problems with this but let’s go ahead and just grant them this for the sake of argument.

Are Americans secure in a free state when they are told that more resources should be spent on arming teachers, or training students to duck and cover and keep silent, as if in a new cold war, only this time the enemy is ourselves?

There’s a new movement growing in the United States preparing schools to defend themselves. The HERO program by Safe Kids Inc teaches students to stand their ground and actually fight off an active shooter if it comes to that. Students learn how to barricade doors, lob heavy books at an attacker, and disorient them with fire extinguishers etc. After all, it’s better to have a game plan and stand your ground than cower in uncertainty and fear. The state of Ohio is also moving in this direction by requiring high school self-defense training.

Vice covered a Baptist school’s training plan to respond to an active shooter. Teachers arm themselves and students are train to actually engage a shooter when he enters the room. High School kids learn to disarm and confront intruders that are there for one purpose: to end them. Watch that video, imagine every school did the same, and tell me how many school shootings you would expect. I’ll venture a guess that number might be 0.

People like Peyton Gendron may be unhinged, but if they know teachers may be armed and students may be prepared, I guarantee they’ll think twice.

Let’s say we grant that Americans should be guaranteed a “freedom from fear.” Wouldn’t the best way to grant it be to prepare them for whatever may come? To let them know that if someone were to threaten them, they’d be ready to bite back. Furthermore, they’d be at peace knowing that shooters wouldn’t dare mess with an armed campus.

If the presence of guns was the cause of school shootings, Liberty University would be the nation’s school shooting hotspot. Spoiler: it’s not. Most shootings happen in gun-free zones. The numbers don’t lie. So let’s protect peace of mind, protect the security of our free state, and protect the Second Amendment of the United States Constitution.

One thought on “Fact Checking the Atlantic About the Second Amendment”