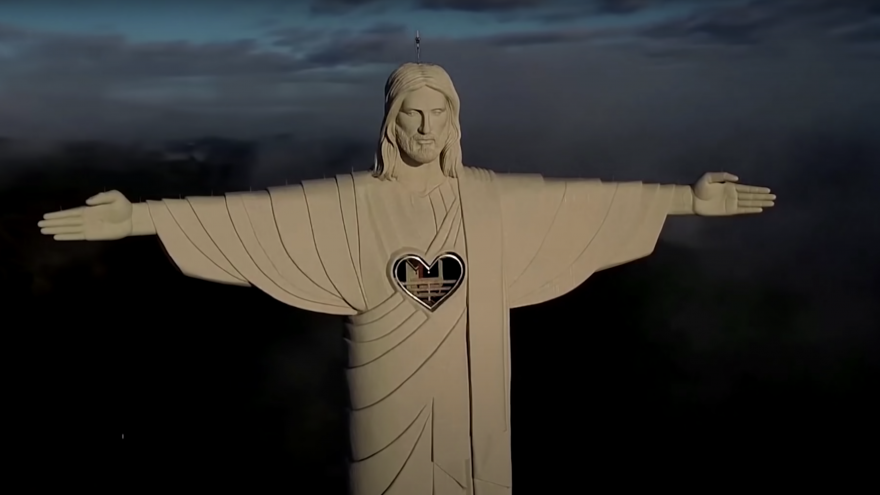 
A small town in Brazil by the name of Encantado just completed the largest statue of Jesus Christ ever constructed. It may be a towering structure, but it speaks to something even higher.

Builders laid the finishing touches on “Christ the Protector” after two years of construction. He stands 143 feet tall to watch over the lush, painted hills and breathtaking valley of Rio Grande do Sul. Encantado has a population of less than 23,000 people but that may now be subject to change.

112 feet up the statue, visitors can peer through a heart-shaped lookout from Jesus’ bosom on the forested hills. In 2019, the Friends of Christ Association set out to build an even greater statue than Rio De Janeiro’s Christ the Redeemer. In 2023, the visitor’s center will open to the public.

Without taking the pedestal into account, Christ the Protector is 123 feet tall, making it the tallest in the world.

In Washington, DC, you can see the towering beauty of the Washington Monument, the Jefferson, and the Lincoln memorial. Grand columns support a towering marble dome that evokes a feeling of awe in our capital rotunda. 8 formidable statues encircle the Library of Congress’ reading room inspiring readers to respect the great men that came before and honor the subjects that they venture to explore.

All this is designed to instill a form of reverent humility. It opens our eyes the grand tapestry of history that unfolds before us and the magnificent heights that great men past have reached. It aims to ignite a fire in your core to aspire to do more than the reaches of your dreams have ever considered. This is the beauty of reverence, and it’s all but lost in this wild age of confusion.

In the United States, Christianity as well as religious belief in general is on the decline. Only 65% of Americans identify as Christian compared to more than three quarters in 2009 and before. There are fewer Christians and 54% of them now say they only attend church a few times each year.

We no longer build grand architecture, we no longer overwhelmingly believe in something greater, and all this coincides with record levels of widespread depression. A Harvard poll found that 51% of participants age 18-29 felt depressed or hopeless. Between 2005 and 2017 depression rates in those age 12-25 increased by more than 50%. What’s worse? Since the Pandemic, we’ve seen another rise of more than 25% in anxiety and depression worldwide. 61% of young adults in America today say they are experiencing “serious loneliness.” Antidepressant use rose by 65% in 15 years leading up to 2017. In the last three months of 2020 alone, October to December, American antidepressant use rose by a whopping 6%.

So what might end this dark night of the soul? Because it doesn’t seem like prescription drugs can hack it.

A Vital Piece of the Solution

In 2017, neurological studies found that mood and thinking patters are profoundly impacted by surrounding architecture. Neuroscientists even found that modern city architecture can be a potential risk factor for mental illness. In the 21st Century, we tend to focus much more on function than elegance. According to the BBC, city planners may start seriously considering this in building construction. Interestingly enough, it’s no novel idea.

The Egyptians built mountainous pyramids to honor their sanctified emperors. The Romans erected glorious temples to honor their gods. The famous author Robert Louis Stevenson said that “mankind was never so happily inspired as when it made a cathedral.” In times of shadow and strife, beautiful and inspiring craftsmanship can even ignite a flicker of hope in abrasive shade.

“The people walking in darkness have seen a great light; on those living in the land of deep darkness a light has dawned.” -Isiah 9:2. That statue overlooking a small town in Brazil is a tourist attraction for some, but for others, it’s beacon.  Isaiah 9 foretells the coming of Jesus Christ, the Messiah gifted to mankind. He is to be a light unto the world as they wandered in darkness. Every day, citizens of Encantato and Rio De Janeiro commute, eat, laugh, and love under His glorious image. In 2009, Rio took the crown as the world’s happiest city. Coincidence? Maybe… maybe not.

Regardless of what you believe, human thriving demands we believe in something. When this country finally decides that it’s time to again, our architecture will reflect it. Saint Thomas Aquinas contends that magnificence and holiness are intimately interwoven. A Magnificent man will spend money on a great work to reflect a greater spirit that dwells beyond it. The Ancient Greek Philosopher Plato contends that the most marvelous work is only the shadow of a perfect form.

This nation was made to aim towards higher things. To build grander monuments. To dream of a glory that would have earth’s greatest towering wonders quiver like blades of grass.

Monuments, masterworks, and monoliths are more than just pretty things to look at. Moreover, their magnificence is only so majestic when the mind of its maker was made to reflect something more. Towering statues, beacons on the mountain side draw the eye of every man, woman and child to the sky. The ever imposing and ever loving image of Jesus Christ stands with arms wide open. While we pale in comparison, no great man was ever great in the face of what he pursued. And this brings us to the heart of why beautiful architecture is so vital. It draws the gaze, it fills with amaze, and it shatters the grays with brilliant arrays of color and hope to guide all our ways.

So build something beautiful, and you just might save this country.