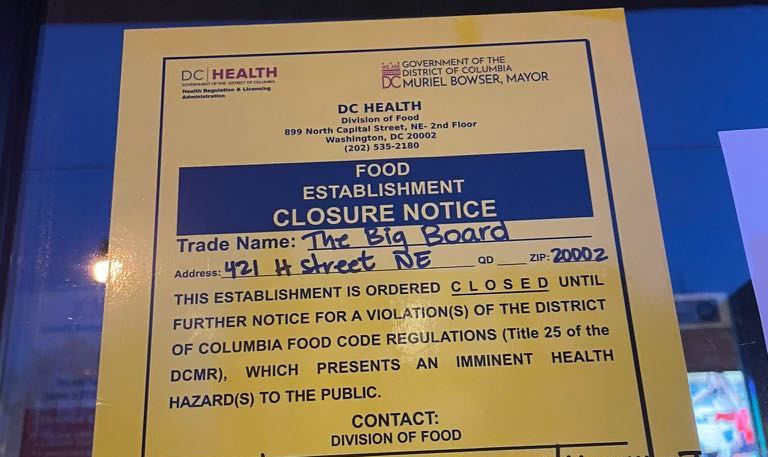 
Washington DC’s “Big Board” restaurant stood up to vaccine mandates and didn’t back down even when big brother tried to shut their doors.

DC imposed 2 fines on the restaurant and suspended their liquor license. But all is not lost. Fans of the Big Board have raised over $34,000 to defend the restaurant. Republican Senator Rand Paul has also pledged his support to fight with them along with other members of Congress. The Big Board has no intention of shutting its doors for good.

So how did all this happen? The restaurant refused to comply with DC’s unethical and unconstitutional vaccine mandates. Mayor Muriel Bowser enacted the mandates on January 11th, 2021, forcing indoor dining establishments and others to require proof of vaccination for guests. This comes despite the fact that vaccines don’t stop or slow the spread of COVID-19. Dr. Anthony Fauci himself admitted this in a public statement.

Before it shut down, we visited the Big Board. The owner, Eric Flannery, said that he has no interest in notoriety or making this a big story. I watched him decline multiple interviews and television appearances. He told us that he simply believes that people shouldn’t be discriminated against based on personal medical decisions that should be private.

Flannery’s sentiment is echoed by many, including scientists who helped develop the vaccines. Dr. Robert Malone and more than 16,000 scientists are standing against these tyrannical mandates. Malone pioneered the MRNA vaccine technology and is a heavily credentialed doctor and the left’s biggest target today. His call to arms is: “If there is risk, there must be choice.”

The CDC makes no secret of the fact that this vaccine is particularly risky among vaccines. It’s produced more adverse reactions, hospitalizations, and deaths than every other vaccine combined over the last 30 years. It’s risky and it doesn’t protect anyone but you.

It’s time for us to stand with Malone, Flannery, and other restaurants like the Big Board to protect Americans’ freedoms to decide for themselves the risks they take.

One thought on “Patriotic Restaurant Shut Down by DC Mandate Tyranny”