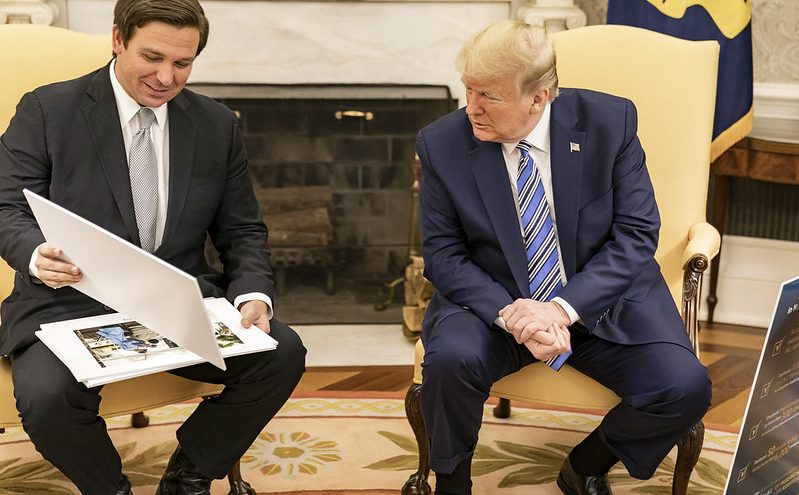 
After President Biden criticized Florida Governor Ron Desantis this week for his handling of COVID, Desantis responded with perhaps one of his best speeches to date. The speech, which lasted just less than 5 minutes, proved to be a re-energizing force in the conservative movement. Freedom fighters across the country should probably be thanking President Biden for giving Desantis the opportunity and the impetus for the speech.

Desantis’ response was succinct but touched on all of the necessary arguments. He started with Biden’s hypocrisy on the southern border.

“He’s imported more virus from around the world by having a wide-open southern border, you have hundreds of thousands of people pouring across every month. And it’s not just from Mexico. In fact, it’s rarely from Mexico… they’re then farming them out all across our communities across this country, putting them on planes, putting them on buses.”

The Governor then pointed out that while Biden does nothing about the huge influx of disease freely flowing across our border, “His solution is he wants to have the government force kindergarteners to wear masks in school.” From there he went on to re-establish his position on medical freedom.

“Joe Biden also believes that vaccination should be mandated by force of government and that you should have to show vaccination status to be able to participate in society… But we said from the beginning, we’re going to make it available for all, but we’re not going to mandate it on anybody, that’s ultimately an individual’s choice to be able to do it.”

Desantis then briefly touched on the fact that Biden and the rest of the establishment are denying science by pretending that natural immunity for COVID recovered people doesn’t exist. He then finished by taking on Biden’s get out of the way comment directly.

Liberty-minded people across the nation should take encouragement from this uncompromising and fearless leader in a swing state. If more people start to emulate Ron Desantis, then perhaps there will be more leaders like Ron Desantis and less like Asa Hutchinson, Brad Little, Mike DeWine, and Kay Ivey. In order to, Make America great again, red states need to become red again. Ron Desantis cannot fight this battle alone; He needs everyday citizens to get up and Stand in the way alongside him.