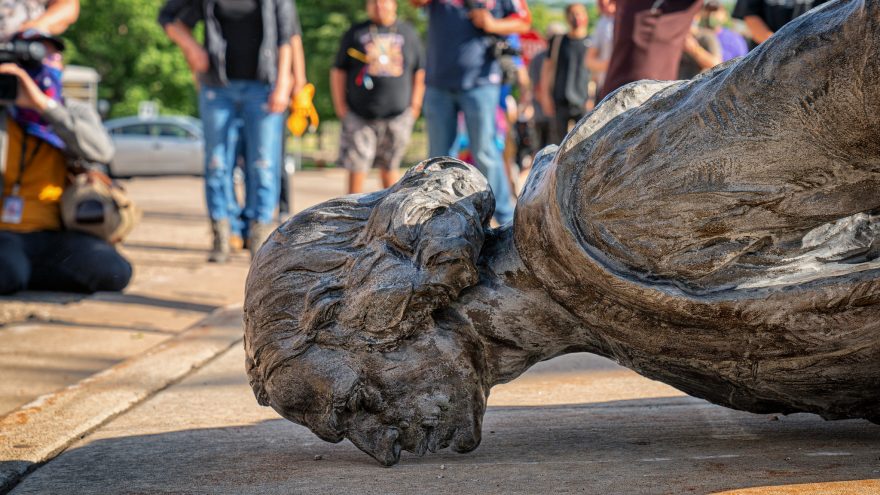 
One of the cultural shocks following the death of George Floyd under a policeman’s knee is the vandalism and destruction of statues across America. Usually, these statues are posted on public land by public officials with public assent … even if that came many years ago.

It’s not undemocratic to advocate for statues of men now considered unworthy to be removed from public spaces. You may argue there are “too many dead white men” in parks. But it’s blatantly undemocratic to vandalize them, behead them or pull them down. These are provocative acts with great potential for mounting revenge, disorder and countervandalism.

It’s amazing that the left can say mere words are violence, or that “silence is violence,” and not think it’s violent to tear down a statue.

No historic figure is safe from the anti-statue mobs. The Oregonian reported, “protesters tore down a statue of Thomas Jefferson, the third president of the United States who also owned over 600 slaves during his lifetime, outside his namesake high school in North Portland.”

Notice how journalists choose the word "protesters" to describe the perpetrators.

Some "protesters" look uneducated or nihilistic. A statue of abolitionist Matthias Baldwin, which stands outside Philadelphia City Hall, was defaced with spray paint. The word "colonizer" was strangely painted underneath. Apparently, any dead white male in a long coat must be racist.

In Boston, a monument to black soldiers who fought for the Union and against slavery during the Civil War was vandalized. The granite backside was covered with phrases including "Black Lives Matter," "No Justice, No Peace" and "Police are Pigs."

Richmond, Virginia -- whose Democratic mayor sits under the state's Democratic governor -- is a hot spot for this vandalism virus. The New York Times reported, "Protesters toppled a statue of Jefferson Davis, the president of the Confederate States of America during the Civil War, in Richmond ... as demonstrators across the country continued to target symbols of white supremacy after the death of George Floyd."

"A statue of Christopher Columbus was torn down and tossed into a lake in a Richmond city park where protesters had gathered for a demonstration in support of Indigenous peoples," The Times added.

"Vandalism" was not the word of choice: "Statues of the Confederate generals J.E.B. Stuart, Stonewall Jackson and Robert E. Lee, all of which stand on the city's Monument Avenue, were marked." Marked?

The Times called all this "a national reckoning over racist imagery and emblems."

Then, as I predicted, someone vandalized the statue Richmond statue of Arthur Ashe, the black pro tennis star of the 1960s and 1970s. The New York Times said the statue was "vandalized," not "marked." It was not called a "reckoning."

Someone sprayed "WLM" ("White Lives Matter") on the pedestal. The man who vandalized was not a "protester," just a "man" who was quoted as saying, "You guys tagged my statue so I am tagging your statue." Stupid tit and tat.

Ashe's nephew David Harris Jr. told The Times: "People are outraged that people choose to vandalize a statue that represents peace, prosperity, inclusion, education, and the life and true fabric of the country: children. ... there are folks out there that don't believe in being inclusive."

The Times fails to see the bitter irony in the assumption that "inclusion" is associated with the side that rips statues down without any care for who is not consulted, or which democratic norms are undermined. The left and its allies in the press are favoring disorder and vandalism ... if it's on "the right side of history."